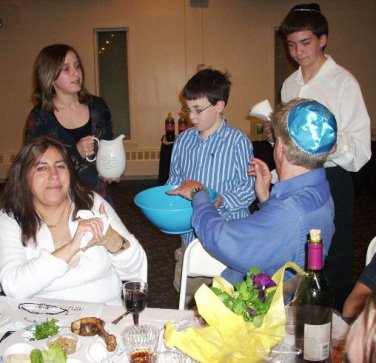 Celebrate Passover, Saturday March 31st at 10:30 am, followed by a light muncheon, luncheon, rsvp to the office.

A Seventh Day Passover Yizkor Service will be held on Thursday, April 5th at 7pm.

Pesach, known as Passover in English, is a major Jewish spring festival, commemorating the Exodus from Egypt over 3,000 years ago. The ritual observance of this holiday centers around a special home service called the seder (meaning “order”) and a festive meal; the prohibition of chametz (leaven); and the eating of matzah (an unleavened bread). On the eve of the fifteenth day of Nisan in the Hebrew calendar, we read from a book called the hagaddah, meaning “telling,” which contains the order of prayers, rituals, readings and songs for the Pesach seder. The Pesach seder is the only ritual meal in the Jewish calendar year for which such an order is prescribed, hence its name. 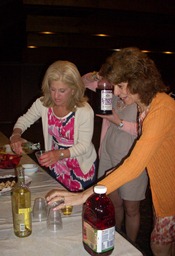 The seder has a number of scriptural bases. Exodus 12:3-11 describes the meal of lamb, unleavened bread, and bitter herbs which the Israelites ate just prior to the Exodus. In addition, three separate passages in Exodus (12:26-27, 13:8, 13:14) and one in Deuteronomy (6:20-21) enunciate the duty of the parents to tell the story of the Exodus to their children. The seder plate contains various symbolic foods referred to in the seder itself.

The story of Joseph gives us the background for how our people ended up in Egypt. It begins with our patriarch Jacob and his 12 sons. One of the sons, Joseph, was the most favored by his father, which caused tension between Joseph and his brothers, who sold him into slavery. The brothers told Jacob that a wild animal had killed Joseph. In truth, Joseph ended up in Egypt where he had many adventures, one of which landed him in jail.Through his ability to interpret dreams, Joseph became an advisor to Pharaoh, managing the country’s food supply so that the people would be fed during the predicted seven years of famine.The famine extended into the land of Canaan where Jacob and his family lived. Joseph’s brothers went down to Egypt in search of food and came before Joseph, but they did not recognize him. Eventually Joseph identified himself to his brothers and invited them and the entire household of Jacob to come down to Egypt so they would survive the famine.

Many generations later, a new Pharaoh arose “who knew not Joseph.” This Pharaoh enslaved the Hebrews and ordered all of their newborn baby boys killed.A newborn, Moses, was saved by the ingenuity of his mother and sister when he was set adrift in a basket in the Nile. As his sister Miriam watched, she saw that Pharaoh’s daughter discovered the baby and decided to raise the Hebrew child as her own. Miriam offered to arrange for a Hebrew nurse (Moses’ mother) to feed and care for the child.

Moses grew up, and one day he witnessed an Egyptian overseer beating a Hebrew slave. So angered by this sight, Moses killed the overseer. Subsequently, he saw two Hebrew slaves arguing and tried to stop them.They turned to him, and one said,”Will you kill me as you killed the Egyptian overseer?” Realizing that there was a witness to the murder and becoming concerned for his life,Moses escaped into the desert. On that journey, God appeared to Moses in a burning bush that was not consumed, and told him to go back to Egypt and deliver the Hebrews from slavery.

With his brother Aaron, Moses went before Pharaoh to demand that the Hebrews be set free. Pharaoh continually refused, and the plagues descended upon Egypt. With the 10th plague, the killing of the firstborn, Pharaoh relented and allowed the Hebrews to leave. In their haste, the Israelites took unleavened dough that baked on their backs into matzah.

The Passover Seder reminds us of our ancestor’s journey down into Egypt, our enslavement there and our eventual flight to freedom. In Jewish tradition, because of the centrality of this story, we are not simply to remember these events but to recount them as if we ourselves had experienced them.