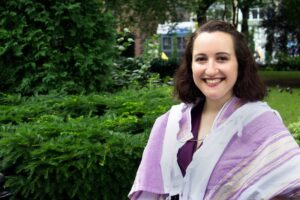 Cantor Michael F. Trachtenberg graduated from Hunter College, Queens College and studied voice with Luigi Velluci of the New York City Opera. Cantor Trachtenberg completed cantorial studies at the Herzliah-Jewish Teachers Seminary of New York.   He served congregations in the Bronx, Lawrence, and Westchester before coming to Temple Isaiah in 1986.  In addition to his duties at Temple Isaiah, he still found time to vocalize with the New York Cantor’s Ensemble and later the Long Island Cantors’ Ensemble and appear in solo programs throughout Long Island.  He is a “maven” when it comes to Jewish history.   In 2005, Cantor Trachtenberg was chosen to be a part of Pave the Way Foundation’s mission to Rome, met Pope John Paul II, and sang in the first-ever cantorial concert in Rome’s Great Synagogue.